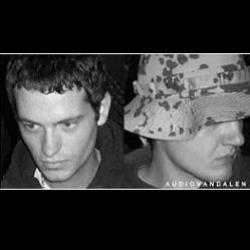 Audiovandalen are just some ordinary guys trying to make new kind of music for the audience. Growing up at the ass of the world with more cows than humans in the neighbourhood, they early realized that music needs to be improved. With the ambition to change the world and to get all the money, fame and bitches they started to make their own beats. So they adapted a little club. Actually, used to be a youth club for kids to hang around, Audiovandalen assumed the club for their own needs: pumpin beats all day long, as loud as possible. So thats where they got their name from - not every amplifier resisted the burden : Audiovandalen exchanged ex- periences, socialized with other DJs and artists and started making their own, distinctive sound, a mix of techno, house and electro. They felt it is time to let the world know about it.

With small performances at some local scene pubs and at self-organized private parties they became known in the neighbourhood. Their new, refreshing and different sound enjoyed a great popularity at both, the audience and the organizers, so further more gigs at nearly every important club in ambit followed. It was time to publish their first record. So Audiovandalen - Invasion with remixes from Sven Laux, Maik:em and NitschGleinser was announced in a small quantity on Pasdenom Records. Although the record had a very good feedback and was sold in GB and Spain, it is the only record Audiovandalen has published up to now. Because of problems with the label they had to cancel the buisiness relation. At the moment Audiovandalen is looking for a new label if you have read this and an idea and you like our music, contact us, meanwhile they focus themselves more on producing new sound tracks than rockin the clubs with their phenomenal live-sets.