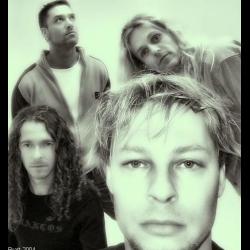 BRATT kicks off as Mich’s solo project in 2001.
Mich feels the need to perform his songs with a band for a long time.

In January 2002 the band is formed.
BRATT’s music can be described as easy accessible poprock.
Energetic , raw edged honest music , played the way it is meant to be.

BRATT contains experienced musicians only and that’s the reason
why BRATT is such a dazzling live-act.
The first gig in march 2002 is a big success.

BRATT wins the semi-finals of one of the bigger Dutch band-contest (Rob Acda Award)
In Haarlem (PATRONAAT) and produces the first live EP “WET” as a result of that gig !!

The simple fact that BRATT plays over fourty times with acts like Silkstone,the Sheer, Slobberbone,Travoltas,the Ripplets and Rich Wymann speaks for itself…
BRATT is an appreciated newcomer in rockland .

All of this achieved single-handed without interference of a label or bookingsagency.
In April 2003 the second EP “Right Here” is a fact , recorded at Clock Studio the Hague.
This EP contains five brand new BRATT tracks .

After reaching a place in the Dutch number one contest “De Grote prijs van Nederland” and
the recording of two singles with producer Evert Nieuwstede (Urban Heroes,BoomBoom Mancini) for the label ITSYOURRECORD (release February 2004 yeahronimo.com) BRATT is ready to hang out with “the big guys”.
BRATT is a very ambitious rock band and here to stay!!!