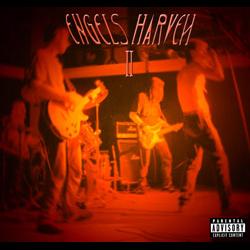 ENGELSHARVEN
Engelsharven surfaced in 1988 as a five piece band with their first release Death in the Silence.
Intent on pushing the barriers of Heavy Metal, the band made
little fuss of popular of style or lyrical contents of guitar based rock music.
With the departure of their lead guitarist and vocalist in 1989,
the core of the band continued on with
Tänon Guitar/Vocals, Rhino Bass and C.C. Fly Drums. Their self
produced 1990 release Im Griff followed up where
Death in the Silence had left off. The big break, however came in 1992
when the CD All Harved Up was released.
Recorded live in studio with GB Producer Martin Pearson, the CD
found them combining complex song structures
with killer riffs on top of a hammering drum beat.
The CD was followed up with nummerous live shows that ensured them a large
following throughout Switzerland. 1993 saw them with two more releases,
the aptly titeld Unplugged, witch again was a live recording and the studio
recording Hardturm. The latter recording also introduced a new lead
voocalist, Kiki. With the band now freed up to concentrate fully on their instruments, the
already tight songs became absolute killer songs
However the sheer power of Engelsharven is best experieced live.