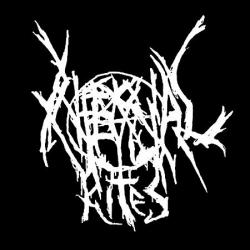 INFERNAL RITES was founded in 1993 by Achamoth and Lars in Olpe/Germany as one of the FIRST german black metal bands At that time they were members of the Death Metal Band CORPSEGRINDER. In late `93 Achamoth wrote the first 3 Songs, INFERNAL RITES, SATAN`S CALLING and HOLOCAUST They started to record her first Rehearsal Tape, which was released in 1998 on Infernal Horde Rec. called Total Destruction Lars left the band in `94 and J.P. came as new the drummer for some months. 3 new tracks were recorded. Achamoth kicked J.P. in spring 1995 and started the recordings for their first Demotape The Black Book Of Achamoth. The recording session was finished in 1996 with the new drummer Noden. After that Release Elivagar joined the band on the bass, and they Re-recorded the song INFERNAL RITES for the Only Death Is Real compilation. In spring `97, a two track Demotape Unholy Funeral was finished. Limited to 50 Pieces and sold out in three weeks. An interview in Christenfeind Mag followed... After that, the band went into a 16 Track Studio to record the legendary Krisndød Demo. In this song the bass was played by Achamoth ... First Interview in Hellstorm Kahlers` Christenfeind Mag More than 800 Pieces were sold all over the world. Only very good reviews pushed the selling of that stuff For example in Germany it was distributed by Last Episode - Germanys biggest BM Label at that time. Many people asking for the old records, and in 1998, Total Destruction was released over Achamoth`s Label INFERNAL HORDE RECORDS. After that release, Elivagar left the band and Noden 2 too, some month`s later. Destructor came as the new drummer, and they started to work on Possessed By Satan. Elivagar joined them for the recording session, and Possessed By Satan and a SODOM Cover Outbreak Of Evil where recorded in 1998 in that Line - Up. Songs were released on a local compilation first. Well, Necromancer join the band as session member on the bass, and Kill The Christians was recorded. After that session, Achamoth went to prison for some months, since he was condemned due to many antichristian, destroying and blasphemous things he had done in 17th January 1997. After his time in jail, the rest of INFERNAL left the band. In 1999 Achamoth gave a interview in ABLAZE Zine more than 3 Pages The best known German Black Metal Magazine at that time. Achamoth continued INFERNAL as a one man band again, and in 2001 the first Mini CD Possessed By Satan was released over a small label from the North of Germany. It was a success, for instance 7,5 points in the German Rock Hard Zine, from one of the most respected writer, Metal Fan and maniac: Götz Kuehnemund. Exclusively good reviews were following in Ablaze Magazine, Eternity Fanzine, Into The Warzone... In 2002 the track Kill The Christians became part of another compilation. Possessed by Satan was Re-released with a different cover in 2003 over Infernal Horde Records and was followed by an interview in Into The Warzone Zine in 4 pages... 2003 Achamoth recorded a new song The Ritual, which was released on The Revenge Of The Unholy demotape, from his other one man band THE THIRD OF THE STORMS over Infernal Horde Rec. Check that Site for listening: www.myspace.com/thethirdofthestorms ...... In 2004 the 10 Years Of Infernal Black Death tape was released. In June 2005 Achamoth started the recording sessions for his first full lenght CD My Immortal Coffin with new songs only in his own studio. After some trouble and death threats against a danish Dance band with the same name INFERNAL, he remembered the first track he ever wrote for his band: INFERNAL RITES, and changed the bandname into this. New four songs were released as the Beyond Your Flesh promo. This tape was for Labels/Zines only and not for sale. In september 2006 the recordings were finished but in october 2006, he re-recorded the vocal lines for track Thrash`n Gutz - his homage to his old Thrash Godz: Nasty Savage, Sodom, Exumer, Assassin... After Kill The Christians which was the first real THRASH METAL song in the history of INFERNAL RITES, Achamoth stated: Its for showing my respect to the old thrash gods, and for bringing back the glorious times of Metal. I started listening to Metal in 1986, and in this song, you can really hear those influences The album will be released in February, 2007. Nearly 10 Years after his anitchristian things... My personaly Way to say FUCK YOU to all the People, and Press - Idiots, who want to piss me off, telling lies about me, and my band. They start big headlines in newspapers, and after that, many folks start to do that to. It was the Inspiration for graveyard destructions on nearly all graveyards in our area. Great And i dont feel sorry for that Why should i Thank you for help - stupid Idiots Another fist in the face of god That Album will be released as the first CD on a new label called Death Choir Records from Berlin/Germany
Next record Takk For Alt will be released in early 2008, brandnew Track called Obey available on
www.myspace.com/infernalrites
Lyrics are from JEFF BECERRA Possessed music by Achamoth, written, and recorded in May 2007 in Bergen/Norway. by achamoth Guitar/Bass/Drums/Vocals.