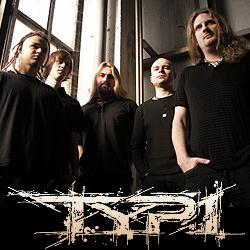 TYP1 was founded in the year 2000 and the recording sessions for their debut album Stechender Schmerz started already in February 2001. After the release TYP1 signed a distribution deal at Vegaland Records.
The following year brought some line–up changes. In 2003 TYP1 produced a promo–cd, on which the songs seemed to be harder and more aggressive than on the debut, nevertheless they fit smoothly into the straight and intense TYP1–sound. In September 2005 the second studio album Ich ist ein Anderer Modern Entertainment / Alive AG was published. It contained ten new songs and a cover of the classic Kinder written by Bettina Wegner.
At the end of the year 2006 Roy Siegel was engaged as the new singer. In August / September 2007 TYP1 recorded some new songs in the meantime with English lyrics, too and published in November 2007 the 6–track–cd Myself–Inside. Only one year later, in October 2008, the band recorded again six new tracks and in December 2008 they published the recent cd Ravendays.